Too Bad We Aren’t All Cowboys: A Review of Stupid People and Their Guns

When terrorists hijacked planes and flew them into the World Trade Center, killing thousands of people, it was a national tragedy. The government responded quickly and effectively. Airport and border security were never the same. The government monitored phones, emails, etc. for potential terrorist activity. It was an inconvenience to society, but there hasn’t been any major terrorist attacks on American soil since (and many thwarted attempts).

When a domestic terrorist attack happens, like the hundreds of mass shootings that have occurred in America in recent years, the normal response is to say, “oh, the government has to limit mass shooters’ ability to continue this.” The obvious way the government can do this: don’t let them have guns. Since most of these mass shooters are acquiring these guns legally, stop selling to them. Or, at the very least, don’t sell them automatic assault rifles, with the ability to kill hundreds of people in a crowded place. Who could possibly need military grade assault weapons for personal use, anyway? There are all kinds of approaches to this: universal background checks, bans on assault rifles, increasing licensing criteria, and a host of other things. The vast majority of first world countries have already done these things- America, not so much.

Here is a quick graph of guns per person in various nations: 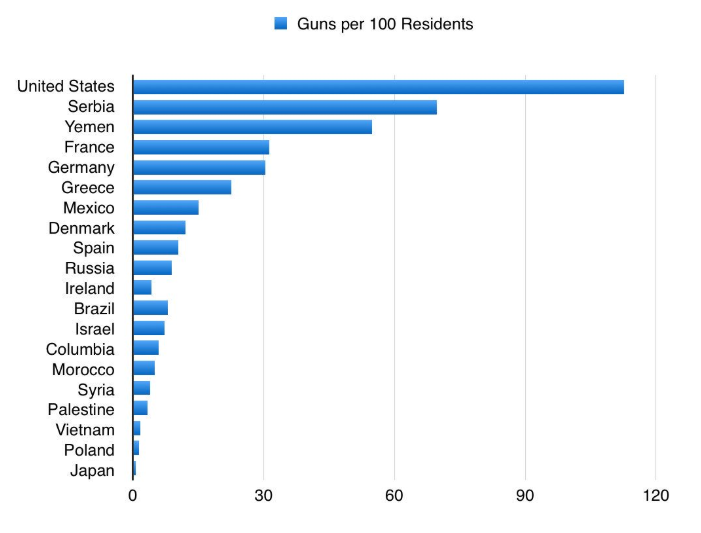 Here is a look at gun deaths by country: 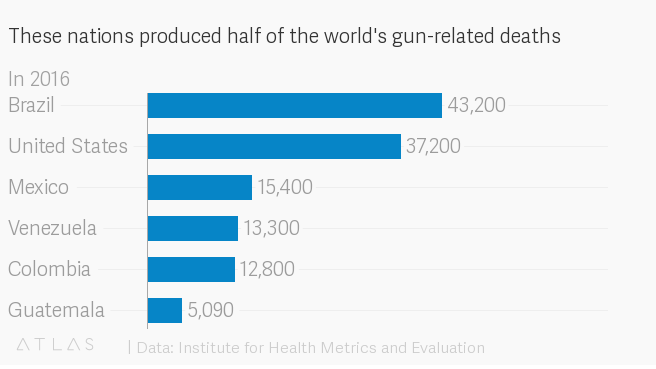 Here is a look at mass shootings by country:

Obviously, America has a gun problem. The solution, however, is different, based on whether you are an idiot redneck or an educated, thinking person.

This is how a simpleton thinks about preventing gun deaths/mass shootings:

Now, this logic worked ok back in the Wild West. There were no police, no societal structure, no sociological data being presented, no rule of law, etc. A barrage of “Indians” attacks your crew? You’d better have some guns to shoot them! Someone insults your honour at the pub? Take it outside and duel. Whenever something goes wrong, shooting someone is kind of the way to settle it.

Without societal order, life is, as Hobbes said, “nasty, brutish and short.” But Hobbes also had an idea called the “Leviathan”, where, essentially, a government can act as a centralized force to ensure justice in a society. This gets rid of “might makes right”, where whoever happens to have the most guns is in power, and replaces it with order and stability (of course, later thinkers added democracy, human rights, rule of law, etc.).

Most of society has already recognized that shoot-outs are not something that should regularly happen in day-to-day life. Redneck Americans? They’re still in the Wild West! To them, they don’t want no government telling them what to do with their guns, or protecting them from bad people. They certainly don’t want to do no book learnin’ about the broader social factors of gun acquisition and deaths. They want to be cowboys!

These idiot rednecks want to praise men who shoot bad guys with guns. “What a hero!” they say. In doing so, they promote the idea that the government should not play a role in regulating guns, because the vigilante “good guys with guns” will solve the problem.

The absolute stupidity of thinking this way is beyond what I have time for, or can honestly even fathom. But I’ll just briefly address: how can someone really be that stupid, beyond the mere romanticism of the “Wild West heroics”?

It requires two essential things: an ignorance of evidence or a manipulation of evidence. Many of these people simply don’t read…at all. They have their Bible and their “Guns and Ammo” magazine (the former gets used to justify the latter- “it’s my God given right to shoot people!”). But other than that, it’s not like they are going on academic databases analyzing gun statistics by country.

But some of them do read, and that might be even scarier, because they are getting a lot of information, and have no critical thinking skills to work through it. They read “Fox News” or “The Blaze” and on television, they watch Sean Hannity and Tucker Carlson explain why “the government is trying to steal your guns” and how, if you don’t all have your guns, “the mass shooters will shoot up everyone, with no one to stop them”.

You would think then, in a country like Japan or England, where barely anyone has guns, that the mass shooting rate would be super high. It’s not, obviously. But I digress, because I’m not writing this to debate the actual issues, because redneck idiots are not interested in the actual issues, and those are the people I’m writing about.

No, redneck idiots don’t care about the actual issues. They want to be cowboys. To them, someone getting shot is not a tragedy; that shooter not getting shot by a good guy is the tragedy. So, if the rednecks continue to get their way, America will continue to see schools shot up, malls and stores shot up, movie theatres shot up, and it will continue praising the redneck idiots who shoot them slightly after, rather than addressing the real problems.

Now, if anyone could provide me any evidence that these “good guys with guns” are actually stopping these mass shooters, I’m all ears. I’ve been studying this topic for two years, and never have I seen an actual example of that. But, you know, even if every time a mass shooter was shot by a good guy after the shooter shot a couple people, I wouldn’t call that an “inspirational story”; I’d call that three people dead, unnecessarily.

So, those redneck idiots might not mind a world where everyone’s packing and shoot-outs are just a way of life, with praising “good guys with guns” as the only response. But the vast majority of us want to just live in peace, like all of the other first world countries. Too bad we aren’t all cowboys.