There are a lot of problems with group assignments. Just like any cultural topic, it is best expressed by memes: 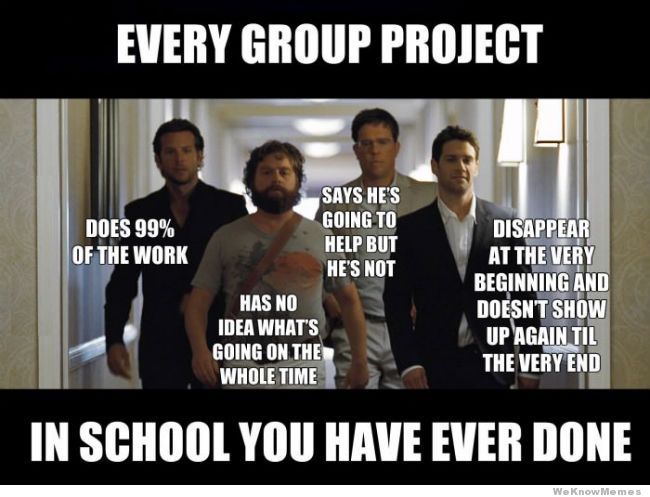 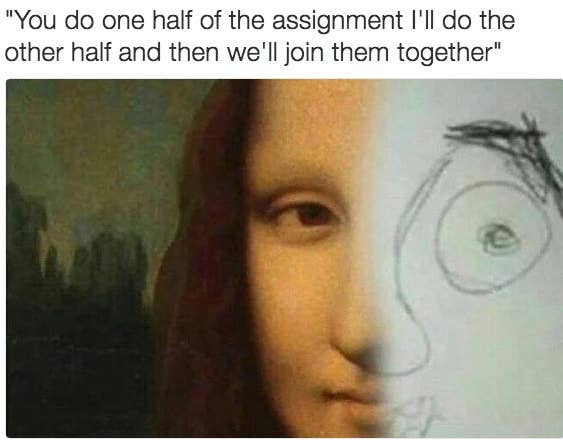 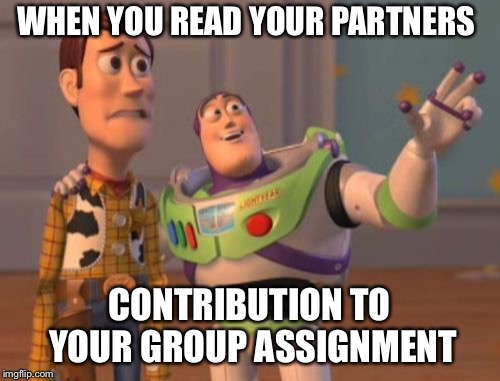 These memes capture what I think are 4 essential problems of group assignments:

Basically, group assignments are a slight upgrade for the dumb people, and a major downgrade for the smart people. A group assignment can be defined as a random group of people, of varying intelligences, that all contribute to a goal, and all effect one another significantly in how effectively that goal is achieved.

Democracy is a group assignment on a large scale. There’s a group of people, with varying intelligences, all working toward a common goal. A key problem of democracy is exactly the same as the ones in group assignments: dumber and smarter people have to work together.

Today, I was preparing to do a podcast on an article I had read on Syrian immigrants in Canada. I started doing additional research to try to answer the questions the article had raised for me. These included things like, “are Syrian refugees economically beneficial or detrimental?”, “do Syrian refugees learn English and incorporate socially into Canadian culture?”, “what is the rationale behind letting increased or decreased amounts of refugees into Canada?”, and others.

I always like to start with the Wikipedia article, just to get a general overview of the topic. As I read through the basics of immigration, I couldn’t help but recall the many conversations I’d had, social media posts I’d seen, and various people I’d heard from, who had very confident opinions about immigration, and yet, had no knowledge of even the basics of the topic. I had heard, so many times, things like, “immigrants get $50,000 per year for life from the government and they don’t ever have to work” or “the Muslims are posing as refugees so they can impose sharia in Canada”. But also on the other side of the debate, people had said things like, “closed borders are a crime against humanity- they should be open to whoever wants to come in” or “immigrants are the hardest working people of all- they are obviously beneficial to the economy”.

These are the kind of idiots who have a right to vote, and make their decision heard in every election. They clearly haven’t even done enough research to skim the Wikipedia page, and yet, they are completely confident and certain of themselves.

Now, here’s me with the antidote, right? I can do a ton of research on the topic and put it into a podcast. People will listen to it, become educated, and develop their opinions. Problem is, that doesn’t actually happen.

For one, many people won’t even listen to it. They’ll say, “Oh, David has some long, boring podcast with a bunch of ‘evidence’ and ‘statistics’…no thanks.” Beyond that, even the people who do listen to it are often immune to evidence and reason. They won’t have actual arguments against mine, but they will hold onto their opinions anyway. This could be because they couldn’t comprehend what I was saying due to its complexity, or the fact that they are not open to changing their opinion, or a combination.

Back to group projects: it feels like I’m doing a lot of work to develop good political opinions. Not just me, but the many, many people who did all the work of compiling and presenting the evidence that makes learning possible for me and others. But this is a small minority of people. The vast majority of people will not appreciate it at all, and will make their opinions completely irrespective of even basic evidence. Me and a few academics and journalists are the smart people doing all the work, and the mass of idiots are either going to not vote at all, or vote based on stupid ideas, and thus, nullify much of the hard work done by the smarter people.

But group assignments still have to get done, and we have to hope that either the smart people who actually do the work have the vast majority of influence, or that the mass of people are actually going to listen to what the experts say. Or, I suppose, in some amazing luck, that people will somehow vote consistently with expert opinion despite not appreciating or listening to it (but that’s an impractical consideration).

The message I want to leave you with is this: don’t make confident opinions out of ignorance. When there are complex issues, appreciate the nuances and the vastness of the information being dealt with. More so, appreciate the experts who gather and interpret that information. Try to study what they say, and form your opinions tentatively and with great humility.

There’s some really smart people in our group here in Canada. If we want to avoid the pitfalls of group assignments and ace our democracy, we have to give them the credit and co-operation they, and we, deserve.